Hangman Adam Page rode into All Elite Wrestling, hot off the heels of Bullet Club success in New Japan, and a Ring of Honor send off that left fans chomping at the bit for more intensity at the hands of a man clad in leather. At the AEW kickoff rally in Jacksonville, Page stood amidst the accolades of his friends in The Elite, surrounded by legacy, with plenty of room to build his own. All eyes were on him, as fans waited to see if he would rise to his strengths, and carve his own path to All Elite brilliance.

Just over one year later, Adam Page has become one of the most over stars in All Elite Wrestling, and it’s amazing to see how he got there. At AEW’s signature PPV, All Out, he and Chris Jericho faced each other in an explosive bout for the AEW World Championship. Chris Jericho would emerge victorious, and would begin a long streak of important matches that were set to build up AEW’s younger talent. Adam Page emerged from this match questioning his strengths, and looking for the inner resolve he needed to climb the ladder of AEW’s roster and emerge victorious as a champion. Page and fans alike wondered whether he could make it big in the main event scene heading into Dynamite’s television debut on TNT.

On October 31st, 2019, at a packed arena in West Virginia, Hangman Page uttered a phrase that would catapult him to stardom in AEW, and immediately endear him as one of the most beloved wrestlers within the All Elite roster.

Almost immediately, Adam Page’s momentum began to snowball into success; he is now arguably the most popular star in the company. With every passing week, thousands of fans would chant along with him, while lining the barricades to shove beer cups into Page’s face. Indeed, his popularity has skyrocketed past many on the main roster, even rivaling his Elite teammates.

Also, he rode a horse into an arena. Like, you have to admit that’s impressive.

The driving force behind Adam Page’s climb to the top isn’t because of his gimmick, or his beer drinking, or his luscious hair locks: it’s *how* he executes these aforementioned qualities that fans have latched onto him so quickly.

While Cody portrays the babyface son of a legendary wrestling family with the insurmountable task of carving his own legacy, and while Kenny Omega plays the role of a wrestler who peaked in Japan, but now struggles finding that same success stateside, Adam Page is different. He lacks the accolades and reputation his friends boast from previous promotions. He feels like he’s not good enough, tough enough, and strong enough compared to the Elite. He wants to become his own person, without the Elite’s help. The AEW fanbase embracing him is the first time in his career that he’s felt secure about himself as a wrestler. With their unwavering support, he steps out from the shadows of the Elite, and into his own destiny.

The flaws Hangman Page sees in himself have become some of his greatest strengths. Because he shows that he is vulnerable, broken, yet resilient, Page establishes a connection between his behavior and the audience’s expectations. He is easy to relate to and empathize with, and his insecurities are all raw emotions many of us have felt in our lives.

Emotion can be a powerful storytelling tool in the world of professional wrestling. We’ve seen numerous examples – from last year’s “KofiMania” to the rise of Daniel Bryan, that crafting an excellent character is a two-way street. Treating an audience with respect is one thing, but ensuring that a wrestler’s character can work is another category of its own, and it requires being knowledgeable of the target audience.

AEW’s target audience is the 18-49 age group, and it is the basis for evaluating their TV ratings every week via the Nielsen poll. AEW Dynamite has consistently hit high marks in the 18-49 demographic since their October 2nd debut. With a large portion of this age group skewing towards the millennial generation, AEW’s marketing and content connects with this group. Young stars such as Kip Sabian, Sammy Guevara, and The Elite heavily advertise their online shows and content via social media, utlizing this audience that primarily consumes content in online digital media.

Hangman Adam Page also resonates well within this demographic. He himself is a millennial born in 1991. He is a master at social media, specifically Twitter. His bio proclaims himself as an anxious millennial cowboy, and his alcohol consumption on Being the Elite implies that he drinks to cope with his emotions. It’s common for much of millennial and even Generation-Z humor to be self-deprecating and unusual in nature. Page’s bold attitude, his unusual tweets that depict the “insides of Satan’s anal cracks” (not kidding about that last one), his ‘yeehaw’s’ , the lower thirds on the name title screen whenever he does his entrance. All of these small details add layers of self-deprecating humor that doesn’t tear Page down, but rather build him into a relatable persona. He is a real person with real emotions.

Adam Page represents all of us, our flaws that are hard to encounter. He still succeeds at wrestling despite these flaws, and this is a message that many fans can resonate with.

Yes, he has a brilliant sense of humor, but he also establishes himself as one with the millennial generation. He understands AEW’s core demographic. Combine this with his emotional hooks and you result in Hangman Adam Page going over significantly. Of course, it can’t be stated enough that his in-ring ability is outstanding and rivals the top Elite members at his best. During the AEW Revolution’s Tag Team Championship match, audiences and critics lauded Adam Page for his athleticism at using Kenny Omega’s famous One Winged Angel finisher, which is an incredible move to pull off itself. His ring awareness, skill, and conflicted yet resolute mannerisms within that match cemented Hangman and Kenny as one of AEW’s top tag teams, as they successfully defended their title against rivals and friends, The Young Bucks.

Adam Page is a gifted wrestler that will continue bringing AEW Dynamite into the forefront of American professional wrestling. As a fan, he has brought me immense joy. Seeing him progress through New Japan, Ring of Honor, and now AEW, has been quite the story to follow for several years. The beauty of professional wrestling lies in long-term storytelling. When you take a wrestler and track their progress, sometimes through different promotions, successes, and even failures, you are piecing together a larger story.

With All Elite Wrestling, Adam Page is writing a new chapter in the story his career. While he has already struck gold within the Tag Team Division, it is clear that the big prize, the AEW World Championship, is well within his reach as he enters this new era. When the day arrives when he stands in the ring basking in the cheers of thousands of fans who stood by him through his Cowboy Sh*t and Elite days, we will all reminisce on the long and dusty roads he traveled to get to the top of the card. Yeehaw. 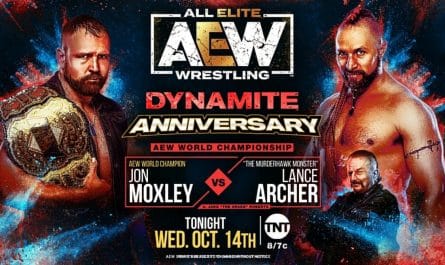