Both men had to be at their finest to reach the final. Tanahashi went to a 30 minute draw with Kazuchika Okada to win A Block, whereas Ibushi defeated then IWGP Heavyweight Champion Kenny Omega to win B Block. Two matches that had intricate stories weaved between old rivals and best friends, that saw Tanahashi and Ibushi besting their greatest foes.

The stage was set for the third and final night in Nippon Budokan. An illustrious and iconic venue that New Japan had not run in more than 15 years, and a venue that Ibushi has personal history with, having been banned from the venue for performing a balcony moonsault in 2012. For 35 minutes we are gifted with a compelling match stacked with poetic nuance, forever looping between breath-taking flying and crushing moves that all causes fiction to blur into reality.

There is no checklist for a perfect match, such a thing may not exist, and if it does, we all have our own definitions. One thing that we can unanimously agree upon is that a great match has to be the ultimate mash-up; it needs intensity; it needs a story; it needs theatrics; it needs an electric crowd; above all else it needs emotion. It has to connect with the audience in a way that the most audacious of moves on their own cannot. Seeing a wild flip or powerful slam is always going to amaze but it isn’t going to stick in our minds for too long.

Seeing Tanahashi win the G1 Climax for a third time when the consensus was that he was too battered and beaten to compete at the top level anymore, that will stick with me forever. To garner that much needed and desired emotion, the match needs a story.

This tale unfolds as Ibushi tries to defeat his God, Tanahashi. “I’ve always called him the God. I guess now is the time to overcome the God.” Ibushi’s faith in his wrestling Gods (Shinsuke Nakamura being the second) led to the creation of Ibushi’s knee strike finisher, Kamigoye, which translated means to surpass God. Going into this match, Tanahashi had a 2-1 lead in singles meetings. Ibushi’s sole victory came courtesy of Kamigoye, a move he had only used two or three times before using it to defeat Tanahashi, for the first and only time. With that single move, Ibushi could win the G1 Climax and truly surpass his God.

God may have put the stars in the sky, but on this night the Golden Star was looking to outshine the creator.

Kota Ibushi enters resplendent and glowing, wholly befitting his Golden Star name. Awaiting at ringside is fellow Golden☆Lover and best friend Kenny Omega, there to offer a hug and words of encouragement. Hiroshi Tanahashi enters with a lion’s roar, a literal sparkle in his eye, aware that something magical is about to take place. Waiting at the end of the entrance ramp, Katsuyori Shibata pulls down the ropes for the Ace to enter the ring. With Omega in Ibushi’s corner and Shibata in Tanahashi’s, the bell rings and the deafening crowd makes their voices emphatically heard, only getting louder as the match progresses.

The emotion of the match is captured immediately by commentator Chris Charlton. He gives a succinct and beautiful summary of Ibushi’s journey to this very moment, from his job as a baggage handler at an airport, to teaching himself how to wrestle, to the G1 Climax final. “If I ever stop, right here in the middle of a sentence, it’s because I’ve got a lump in my throat.” Charlton’s personal investment in the match is something rarely seen from commentators, it’s refreshing and genuine.

Tanahashi asserts his dominance as the better mat wrestler in the early stages until the first blow is thrown, courtesy of a striking mid-kick from Ibushi, allowing both men to establish where their advantages lie. The action promptly speeds up and, remarkably, never slows down for the remainder of the match.

Tanahashi sings his greatest psalms as he spends the match focusing on Ibushi’s weakened knee that has been victimized throughout the tournament, a melody of dragon screw leg whips and submissions with an encore of High Fly Flows. Although believing in Tanahashi as a deity, Ibushi doesn’t attend the Ace’s church and consistently works to disrupt Tanahashi’s sermon attempts.

One of many callbacks that pulls from their match history sees Tanahashi attempt to dropkick Ibushi as he is stood on the apron. In 2018 at Power Struggle it crumbled Ibushi, but on this night, Ibushi avoids the dropkicks and lands a nasty stomp onto Tanahashi, a subtlety for fans to see the progress of Ibushi, his faith providing self-wisdom, enabling to him counter to his God.

Sacrilege would be inevitable for Ibushi, he wouldn’t be able to defeat Tanahashi without becoming a God-killer.

A stern slap across Ibushi’s face unlocks the door for his dark side to take over. A string of shattering palm strikes sear Tanahashi’s face and chest, with the Ace collapsing into the corner. One year prior, in this same scenario, the ungodly Ibushi proved too much and overwhelmed Tanahashi. But now, unafraid of the demon that stands before him, Tanahashi stands and slaps Ibushi again. The divine iron will of Tanahashi bursts as he takes strides forward, defiantly enduring every shot Ibushi executes, want of greatness overriding fear. His muscles flaring and body shaking, Tanahashi forces Ibushi across the length of the ring and corners him through sheer fighting spirit.

For no more than 30 fervent seconds, the brimstone of hell fills the ring as Tanahashi and Ibushi throw stiff slaps with no pause. The vicious exchange culminates when Ibushi floors Tanahashi with a thunderous lariat, his “arms just long enough to punch God in the face.” The fire inside Tanahashi proved strong enough to exorcise Ibushi, although shortly Tanahashi would be requiring another miracle.

Ragnarok was the cataclysmic destruction of the Norse Gods, and now it was time for Ibushi’s best attempt to fell Tanahashi.

In quick succession Ibushi destroys Tanahashi with Nakamura’s Boma Ye (who better to slay a God than another God?); a standing moonsault landing with his knees into Tanahashi’s midsection, Tanahashi evidently having God-like ability as it’s a miracle his ribs were not broken; an immobilizing lawn dart constricts Tanahashi’s neck into itself, the same move that Ibushi injured him with two years prior; finally Ibushi hits his trademark second rope hanging German suplex and finishes the deadly combo with a Last Ride, the crowd certain that no man can survive such devastation. But the immortal Tanahashi stays alive and his resurrection begins, Ibushi’s reverence for Tanahashi as a deity readily understandable when he astonishingly does not secure victory.

A dragon suplex and a trifecta of High Fly Flows inevitably prove too much for Ibushi and he succumbs to Tanahashi. They confront each other one last time after the bell. Heartbroken, war torn and defeated, Ibushi backs off, not inclined to be blasphemous to his God anymore than is necessary. Unable to hit Kamigoye, Ibushi failed to surpass his God but assuredly ascended to the heavens to sit firmly alongside Tanahashi.

It was an herculean effort from Ibushi, an effort that earned him his place among the Gods in Asgard with the blessing of the New Japan Allfather himself, Tanahashi – “Everything about him [Ibushi], is greater than me now. I acknowledge that about him.”

The Tenacity of Kenny Omega

Mikey Rukus: Behind The Music Of AEW 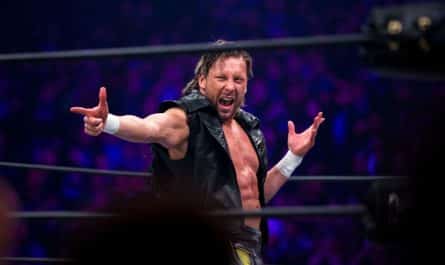 Golden Heartbreak: Kenny Omega, and the Art of Long-Term Storytelling